Home » »Unlabelled » How to take time off work

How to take time off work 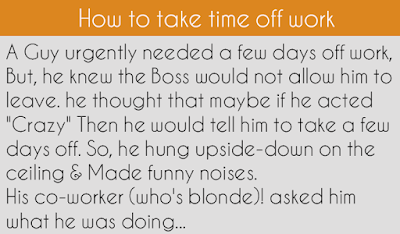 A Guy urgently needed a few days off work,

But, he knew the Boss would not allow him to leave.

he thought that maybe if he acted "Crazy"

Then he would tell him to take a few days off.

So, he hung upside-down on the ceiling &

His co-worker (who's blonde)! asked him what he was doing.

He told her that he was pretending to be a light bulb,

So, that the Boss might think he was "Crazy" & give him a few days off.

A few minutes later the Boss came into the office and asked,

"What are you doing?"

He told him he was a light bulb.

He said, "You are clearly stressed out."

Go home & recuperate for a couple of days."

He jumped down & walked out of the office...

When his co-worker (the blonde) followed him,

The Boss asked her