A priest and a nun are caught in a blizzard 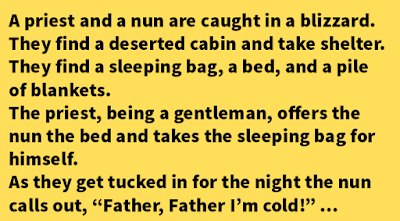 A priest and a nun are caught in a blizzard.
They find a deserted cabin and take shelter.
They find a sleeping bag, a bed, and a pile of blankets.
The priest, being a gentleman, offers the nun the bed and takes the sleeping bag for himself.
As they get tucked in for the night the nun calls out, “Father, Father I’m cold!”
So the priest gets up and puts another blanket on the nun. “Is that better Sister?” he asks.
“Yes Father, much better,” she replies.
So he gets back in his sleeping bag and starts to nod off when she again calls out with, “Father I’m still cold!”
So once again the priest gets up and puts another blanket on her, ensuring she is tucked into the bed well. “Is that better Sister?” he asks.
“Oh yes Father, that’s much better,” she says.
So the priest gets himself back into the sleeping bag and this time is just starting to dream when he wakes up to her call of, “Father, Father I’m just so cold!”
The priest thinks long about this and finally says, “Sister, we are in the middle of nowhere in a blizzard. No one but you, myself, and the lord himself will ever know what happens here this night. How about, just for this night, we act as though we were married?”
The nun thinks on this for a minute, she can’t help but admit to herself she’s been curious, and finally answers with a tentative, “OK Father, just for tonight, we will act as though we are married.”
So the Father replies,
“Get up and get your own damned blanket ya cow!” and rolls over to fall asleep.
Newer Post Older Post