Humor – Living off the grid 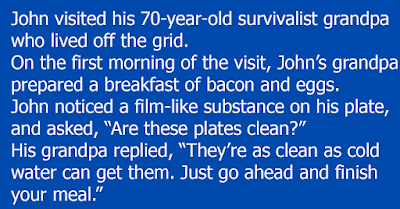 John visited his 70-year-old survivalist grandpa who lived off the grid.

On the first morning of the visit, John’s grandpa prepared a breakfast of bacon and eggs.

John noticed a film-like substance on his plate, and asked, “Are these plates clean?”

His grandpa replied, “They’re as clean as cold water can get them. Just go ahead and finish your meal.”

For lunch, Grandpa made hamburgers.

Again, John was concerned about the plates, as his appeared to have specks of dried egg on it. “Are you sure these plates are clean?” he asked.

Without looking up, Grandpa said, “I told you before, those dishes are as clean as cold water can get them!”

Later, as John was leaving, his grandpa’s dog started to growl and wouldn’t let him pass.

John said, “Grandpa, your dog won’t let me get by!”

Grandpa yelled to the dog, “Cold Water, go lie down!”