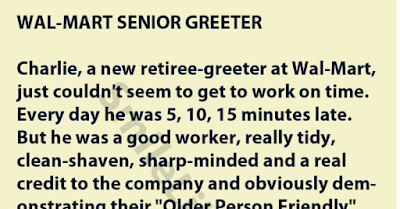 CHUCKLE OF THE DAY: Charley, a new retiree-greeter at Wal-Mart, just couldn't seem to get to work on time. Every day he was 5, 10, 15 minutes late. But he was a good worker, really tidy, clean-shaven, sharp-minded and a real credit to the company and obviously demonstrating their "Older Person Friendly" policies.

One day the boss called him into the office for a talk. "Charley, I have to tell you, I like your work ethic, you do a bang-up job when you finally get here, but your being late so often is quite bothersome."

"Well good, you are a team player. That's what I like to hear.”

“Yes sir, I understand your concern and I’ll try harder.”

Seeming puzzled, the manager went on to comment, “It's odd though, you coming in late. I know you're retired from the Armed Forces. What did they say to you there if you showed up in the morning so late and so often?"

The old man looked down at the floor, then smiled.

He chuckled quietly, then said with a grin, "They usually saluted and said, "Good morning General, can I get your coffee sir?"