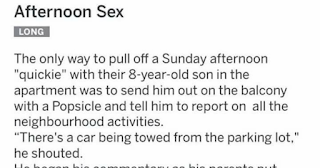 The only way to pull off a Sunday afternoon “Quickie” with their 8 -year old son in the flat, was to send him out on the balcony with a Popsicle and tell him to report on all the street activities.

Their 8-year old began his commentary as his parents put their plan into operation;

‘There’s a car being towed from the car park,’ he shouted.

‘An ambulance just drove past’

‘Looks like the Anderson’s have visitors,’ he called out.

‘Jason is on his skateboard!

After a few moments he announced,

‘The Coopers are having a shag!

Startled , his mum and dad shot up in bed!

Dad cautiously called out, ‘How do you know that?’

‘Jimmy Cooper is standing on his balcony with a Popsicle .’