Home » »Unlabelled » after the honeymoon. 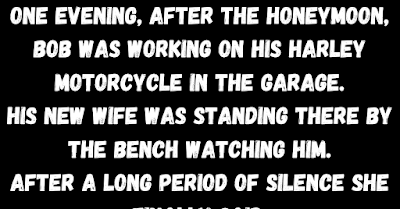 One evening, after the honeymoon, Bob was working on his Harley motorcycle in the garage.

His new wife was standing there by the bench watching him.

After a long period of silence she finally said, "Honey, I've just been thinking, now that we’re married, maybe it's time you quit spending so much of your time out here in your garage.

You probably should consider selling your Harley and all that welding equipment; they take up so much of your time.

And that gun collection and fishing gear, they just take up so much space.

And you know the boat is such an ongoing expense; and you hardly use it.

I also think you should lose all those stupid model airplanes and your home brewing equipment..."And what’s the use of that vintage hot rod sports car?

Bob got a horrified look on his face.

He replied, "You were starting to sound like my ex-wife."

"Ex-wife!?" she shouted, "YOU NEVER TOLD ME YOU WERE MARRIED BEFORE!"