After his exam the doctor said to the elderly man 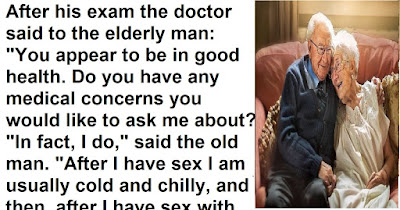 After his exam the doctor said to the elderly man: "You appear to be in good health.
Do you have any medical concerns you would like to ask me about?
"In fact, I do," said the old man. "After I have sex I am usually cold and chilly, and then, after I have sex with her the second time, I am usually hot and sweaty."
After examining his elderly wife, the doctor said: "Everything appears to be fine. Do you have any medical concerns that you would like to discuss with me?"
The lady replied that she had no questions or concerns. The doctor then said to her: "Your husband had an unusual concern. He claims that he is usually cold and chilly after having sex with you the first time, and then hot and sweaty after the second time. Do you know why?"
"Oh that crazy old fart," she replied. "That's because the first time is usually in January and the second time is in August"...
Newer Post Older Post