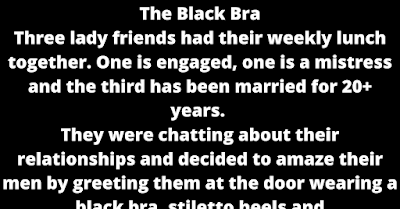 Three lady friends had their weekly lunch together. One is engaged, one is a mistress and the third has been married for 20+ years.

They were chatting about their relationships and decided to amaze their men by greeting them at the door wearing a black bra, stiletto heels and a mask over their eyes. They agreed to exchange notes at their lunch the next week.

The story of the engaged friend: "The other night when my boyfriend came over he found me with a black leather bodice, tall stilettos and a mask. He saw me and he said, 'You are the woman of my dreams...I love you.' Then we made passionate love all night long."

The story of the mistress friend: "Me too! The other night I met my lover at his office and I was wearing a raincoat. Under it only the black bra, heels and a mask over my eyes. When I opened the raincoat he didn't say a word, but he started to tremble and we had wild sex all night."

The story of the married friend: "When my husband came home I was wearing the black bra, black stockings, stilettos and a black mask over my eyes. When he came in the door and saw me he said. 'What's for dinner Zorro?'"

Marie was in the kitchen fiddling around when she hollers out.... "Boudreaux, you need to go out and fix da outhouse!"

Marie yells back, "Yes dere is; now git out dere and fix it."

So.......Boudreaux mosies out to the outhouse, looks around and yells back, "Marie dere ain't nuthin wrong wid dis outhouse cher! "

Boudreaux yells back, "I ain't stickin my head in dat hole!"

Marie says, "Ya have to stick yur head in da hole to see what to fix."

So with that, Boudreaux sticks his head in the hole, looks around and yells back,"Marie - Dere ain't nuthin wrong with dis outhouse!"

Marie hollers back, "Now take your head out of da hole!"

Boudreaux proceeds to pull his head out of the hole, and then starts yelling, "Marie - Help! My beard is stuck in da cracks in da toilet seat!"

To which Marie replies, "Hurts, don't it?"