They go to the local brothel during their last days 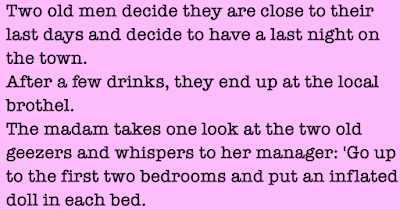 Two old men decide they are close to their last days and decide to have a last night on the town.

After a few drinks, they end up at the local brothel.

The madam takes one look at the two old geezers and whispers to her manager: 'Go up to the first two bedrooms and put an inflated doll in each bed.

These two are so old and drunk, I'm not wasting two of my girls on them.

They won't know the difference.'

The manager does as he is told and the two old men go upstairs and take care of their business.

As they are walking home the first man says,

says his friend, 'Why do you say that?'

'Well, she never moved or made a sound all the time I was loving her.'

His friend says, 'Could be worse I think mine was a witch.'

'Well, I was making love to her, kissing her on the neck,

and I gave her a little bite.

then she farted and flew out the window  took my teeth with her!'