Two women are on a girls’ night out – Funny Joke 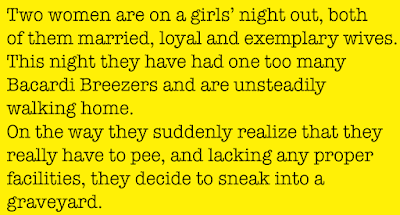 Two women are on a girls’ night out, both of them married, loyal and exemplary wives.

This night they have had one too many Bacardi Breezers and are unsteadily walking home.

On the way they suddenly realize that they really have to pee, and lacking any proper facilities, they decide to sneak into a graveyard.

The first woman realizes that she has nothing to wipe with, so she uses her underwear and then throws it away.

Her friend, however, is wearing expensive lingerie and doesn’t want to resort to such methods. Instead, next to a grave she finds a ribbon on a wreath, so she uses that.

Having finished, they both walk home, tipsy but happy.

“That’s nothing,” says the other man, “My wife came home with a card stuck between her butt cheeks that said,”…

“From all of us at the Fire Station, we’ll never forget you.”