Home » »Unlabelled » THREE WOMEN were sitting naked in a sauna.

THREE WOMEN were sitting naked in a sauna. 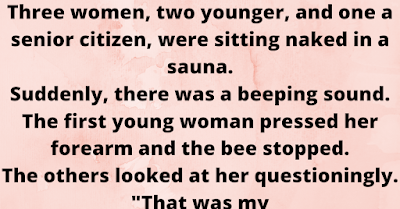 Three women, two younger, and one a senior citizen, were sitting naked in a sauna.

Suddenly, there was a beeping sound. The first young woman pressed her forearm and the bee stopped.

The others looked at her questioningly. "That was my pager," she said. "I have a microchip under the skin on my arm."

A few minutes later, a phone rang. The second young woman lifted her palm to her ear. When she finished, she explained that she had a microchip in her hand.

The older woman felt very low tech. Not to be out done, she decided she had to do something just as impressive.

She stepped out of the sauna and went to the bathroom.

She returned with a piece of toilet paper hanging from her rear end. The others raised their eyebrows and just stared at her.

"Well, will you look at that! I'm getting a fax!