Two guys left the bar after a long night of drinking 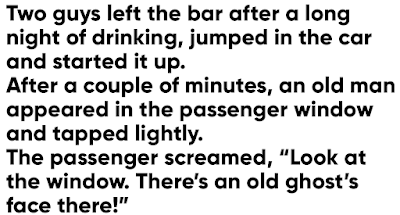 Two guys left the bar after a long night of drinking, jumped in the car and started it up.

After a couple of minutes, an old man appeared in the passenger window and tapped lightly.

The passenger screamed, “Look at the window. There’s an old ghost’s face there!”

The driver sped up, but the old man’s face stayed in the window.

The passenger rolled his window down part way and, scared out of his wits, said, “What do you want?”

The old man softly replied, “You got any tobacco?”

The passenger handed the old man a cigarette and yelled, “Step on it,” to the driver, rolling up the window in terror.

A few minutes later they calmed down and started laughing again.

All of a sudden there was a light tapping on the window and the old man reappeared.

“There he is again,” the passenger yelled. He rolled down the window and shakily said, “Yes?”

“Do you have a light?” the old man quietly asked. The passenger threw a lighter out the window saying, “Step on it!”

They were flooring it and going about 100 miles an hour, trying to forget what they had just seen and heard, when all of a sudden there came some more tapping.

“Oh my God! He’s back!” The passenger rolled down the window and screamed in stark terror, “WHAT NOW?”

“You want some help getting out of the mud?”