Home » »Unlabelled » Nervous new priest tried a risky remedy to soothe his nerves, but the consequences are hilarious

Nervous new priest tried a risky remedy to soothe his nerves, but the consequences are hilarious 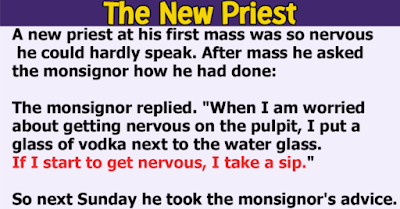 After mass, he asked Monsignor how he had done it. Monsignor replied, “When I fear being nervous in the pulpit, I put a glass of vodka next to the glass of water. If I start to get nervous, I take a sip.

The following Sunday, the new priest decided to follow Monsignor's advice. At first he felt nervous and took a drink. He started talking about a storm.

Back in his office, he found a note on the door that read:

– Jesus was consecrated, not constipated.

- The Father, the Son and the Holy Spirit are not called "dad, junior and the ghost".

– David killed Goliath, he didn't “fuck him up”.

– When David was hit by a rock and knocked off his donkey, we don't say he was “stoned from his donkey”.