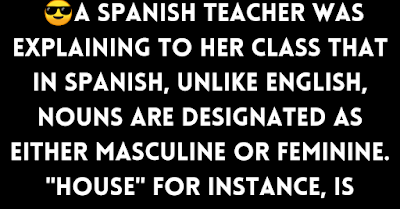 😎A SPANISH Teacher was explaining to her class that in Spanish, unlike English, nouns are designated as either masculine or feminine.

"Pencil," however, is masculine: "el lapiz."

A student asked, "What gender is 'computer'?"

Instead of giving the answer, the teacher split the class into two groups, male and female, and asked them to decide for themselves whether *"computer" should be a masculine or a feminine noun.*

Each group was asked to give four reasons for its recommendation.

The men's group decided that "computer" should definitely be of the feminine gender ("la computadora"), because:

1. *No one but their creator understands their internal logic;*😂😂

2. *The native language they use to communicate with other computers is incomprehensible to everyone else;😜😜*

3. *Even the smallest mistakes are stored in long term memory for possible later retrieval;*

4. *As soon as you make a commitment to one, you find yourself spending half your pay check on accessories for it.*

The women's group, however, concluded that computers should be Masculine ("el computador"), because:

1. *In order to do anything with them, you have to turn them on😝*

2. *They have a lot of data but still can't think for themselves;😄*

3. *They are supposed to help you solve problems, but half the time they ARE  the problem;😜*

4. *As soon as you commit to one, you realize that if you had waited a little longer, you could have gotten a better model.*

Send this to all the smart women you know...and all the men that have a good sense of humour!...