Home » »Unlabelled » 3 Bikers Pick On The Wrong Person At A Diner And Live To Regret It.

3 Bikers Pick On The Wrong Person At A Diner And Live To Regret It. 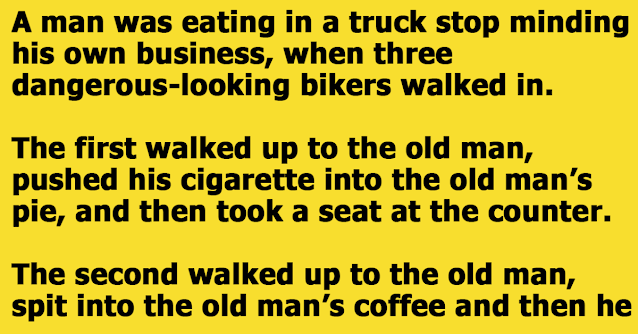 Biker culture has a set of ideals which celebrates freedom and oftentimes does a lot of good for its local community.

But like any large group of people, there are a few bad eggs that tarnish the name. Heres a story of how one man was just minding his own business at a truck stop diner when three of these bad eggs walked in.

A man was eating in a truck stop minding his own business, when three dangerous-looking bikers walked in.

The first walked up to the old man, pushed his cigarette into the old man’s pie, and then took a seat at the counter.

The third walked up to the old man, turned over the old man’s plate, and then he took a seat at the counter.

Without a word of protest, the old man quietly left the diner.

One of the bikers said to the waitress, Humph, not much of a man, was he?

The waitress replied, Not much of a truck driver either. He just backed his truck over three motorcycles.  🤣🤣